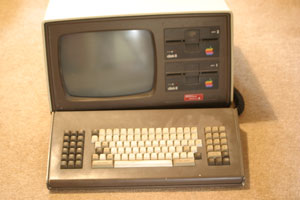 This machine was obtained from David Harrison's collection in March 2005.

The machine is an unusual implementation of the Apple II system, adapted into a system for type setting. There are two of these in the collection. One works (just), the other fails to light up. They were both made in 1984 (as they are date stamped) and carry the serial numbers 1059 and 1114.

Looking for information on the web I found:

"Linotype-Paul Ltd. introduced the APL-100 and APL-200 video input keyboards incorporating Apple II personal computers. In the same year, Typecraft Systems Ltd. launched inexpensive terminals founded on the Commodore Pet personal computer. Both developments were significant in marking the beginning of a trend towards the use of generic hardware for the fabrication of composition systems and a move away from proprietary equipment."

I suspect these are rare Apple machines.

See this site for an interesting collection of clones!