This is an example of a mechanical computer. It is probably dated before 1950, but I have no details. There is no name plate on the machine.

The machine is owned by the London Science Museum, it was lent to ICL in 1988 then given to the collection by mistake.  The machine is now on display in the Computer Science department at York University.

The machine was altered for display, probably by ICL. It came from Fujitsu in there offices in Bracknell, found and donated by Hamish Carmichael.

The machine is used to read and print the contents of cards. It can also add up the values on the cards and print the totals out.

A note from Dennis Hart on the machine...

"Your photo looks like a 36 column sorter in use till the early 50's and was replaced with the 40 column system the card size was about the same with extra columns and an extra row to allow for full alpha punching.I was a field engineer with Powers Samas from 1951 to 1971 having worked on 21 col 36 col 40 col 65 col and 80 column systems then untill about 1990 I worked as an independent engineer servicing the old mechanical equipment for customers who were not ready to go electronic.Your photo of the tabulator looks like a 65 column model again replaced with the 80 column and early electronic equipment I think the 40 column systen out lasted the 65 & 80.I converted many tabulators from Ł.s.d. to decimal on the early 70's.

I do not know any way to accurately date the sorter. Check to see if it is a 36 column. lift the glass cover lid over the sensing pins and on the left chrome bar there will be a scale 1-36 or 1-40 as I said if it is 36 then these went out in the early 50s the 40 column range I worked on as late as  1990/91-but have now long since scrapped all my parts books and operators manuels. If the card has wrecked under the sensing pins U must wind the pins up by hand so that they are clear with small driver inserted between the feed rollers-to open them up slightly use a wreck knife (which I dont suppose you have) to remove the card I might still have one. These old machine ran at about 400 cards per min the later ones at about 650 so the feed settings have to be very accurate-the card pick up knife 4.5 thou and the gap for the card to go through abouit 9.5 thou but why did it wreck in the first place dirt incorrect feed settings etc. Many public libraries all over the country used these sorters for keeping check on lending books"

The following is a copy of an email from Robin Hill, who used this type of machine and nicely places it into context:

"The machine is quite complex. It takes cards in from this side, the cards are shown in blue in the middle (see below). These come out on the other side of the machine.

Here are the photos of the machine when  got it: 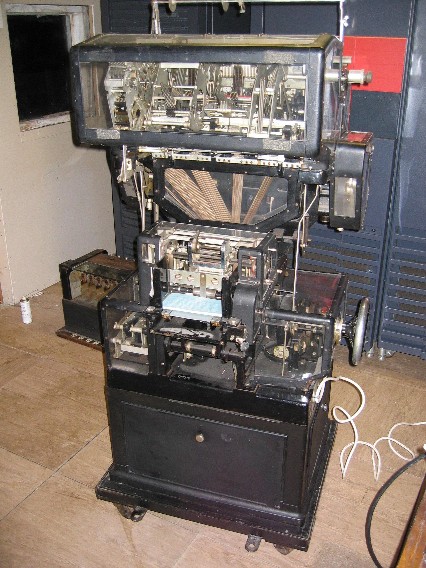 The machine is run from a motor in the box at the bottom. The handle on the right (above) is used to hand crank the machine.

The box with the rods in (see below, right)  is the programming box for setting up the machine. 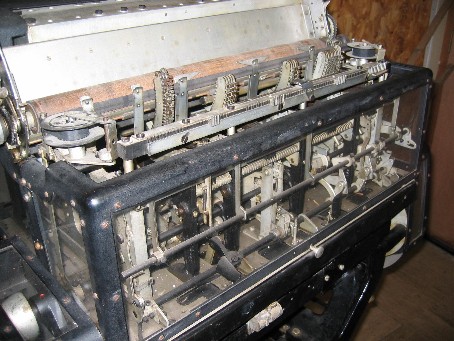 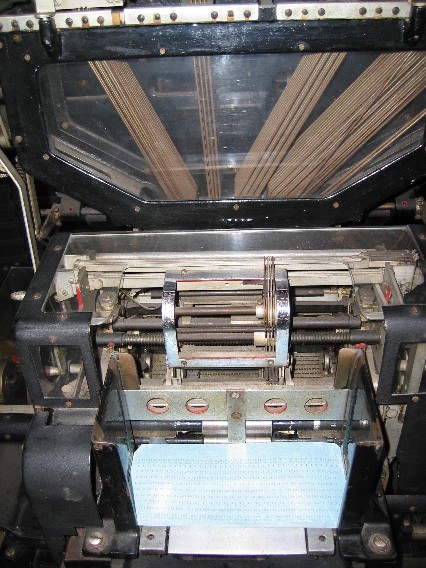 Above left shows the printer mechanism.

The picture below shows how complex the machine is. 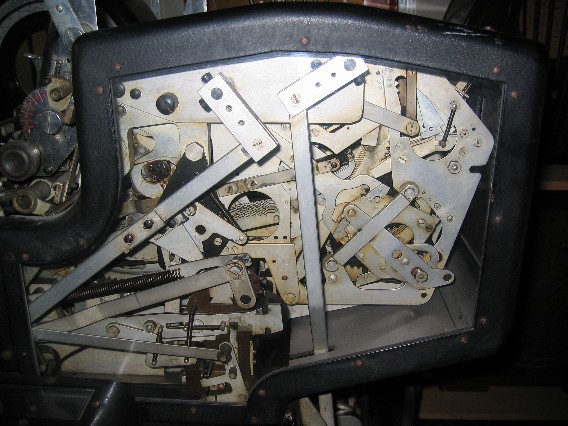