Uses and reason for use:
The machine in the collection came from Cambridge University Computing Service where it was named Phoenix. The first part of the machine was installed in Cambridge in 1982 as 3081D then upgraded to the 3084 in 1989 (See http://www.cl.cam.ac.uk/UoCCL/misc/EDSAC99/history.html for a time line/history of the Computer lab where the machine lived). It ran until 1995, and was removed on 18 Sept 1995. It was the last mainframe to be used by the University. Unfortunately I was only able to get one half of the machine for the collection, in effect a 3081. The IBM site given above indicates that the machine will run each of the units individually. When we disconnected it there were only a few wires between the machines.

Another example of how the IBM 3084Q was used is described in
http://www.disaster-resource.com/articles/learning_from_past_eckert.shtml by Paul Eckert. It was used as a mainframe in the data centre and ran the MVS (Multiple Virtual Storage) operating system.

In Issue 3 of MacTech Paul Zarchan compares the speed of a Prodigy 4 machine against the IBM 3084 for simulations, for example a Butterworth filter. The Prodigy 4 took around 10 times longer than the 3084 to run the simulations, but the results are impressive because it was a $6,000 microcomputer rather than an $8,700,000 mainframe. http://www.mactech.com/articles/mactech/Vol.03/03.03/Workstation/index.html

The IBM 3084 was used as a mainframe computer by the First National Bank of Maryland in its headquarters. An article in Network World 18 Jul 1988 describes the planned introduction of a microwave network, with stand-alone controllers in each branch so that even if the mainframe computer was to fail the branches could operate as normal.  http://books.google.co.uk/books?id=VRMEAAAAMBAJ&printsec=frontcover#v=onepage&q&f=false

Original Cost:
The IBM 3084 could only be purchased as an upgrade from the IBM 3081 Model Group K. The original cost of this system with the upgrade was $8,700,000.  It was also possible to rent the system at a cost of $398,570 per month. These costs can be found on the IBM archives site (http://www-03.ibm.com/ibm/history/exhibits/mainframe/mainframe_PP3084.html)

The machine uses two model K 3081 Processor Units with 64Kb of fast buffer memory. Each 3081 K Processor Unit is composed of two processors. The system could be run using all four processors as a coupled multiprocessor or using each 3081 K separately as two dyadic systems.  Running the system as a coupled multiprocessor improved the performance, with up to 1.9 times the instruction execution rate of a single 3081 K. The advantage to running the system as two dyadic systems is that it was more flexible, because they can be used separately. This allows one to be running while the other undergoes maintenance.  The processors are initialised by a 3082 Processor Controller.

The system supports up to 4,080 I/O devices. The one in the collection has a printer, two display consoles and a Calcomp plotter for providing output. It has a Disk Drive Control Unit, Tape Control Unit and Tape Drive Unit to write output data.

Description:
This is a prime example of a large 1980's main frame. The IBM site (http://www-1.ibm.com/ibm/history/exhibits/mainframe/mainframe_PP3084.html ) gives a list price of the machine of $8,700,000 in 1982 and shows the example of a system. The machine was IBM's most powerful computer in 1982.
The machine is water cooled so it comes with a chiller to take out the excess heat. It runs off 400Hz mains power and so needs special rotary converters to do this, these are also preserved. As an extra, the raised floor that went with the machine was also removed. The machine now sits on it in the buildings that store the machines.

The machine in the collection is made up of:
A processor unit.
3082 Processor controller.
3081 Processor Unit.
3274 Tape Control Unit.
4670 Tape Drive Unit.
3087 Coolant Distribution Unit.
3089 Power distribution unit.
8880 Disk Drive Control Unit.
3287 Printer.
3278 Display console (x2) type 2A
Chiller Unit.
Calcomp plotter that ran with the machine.
All cables to connect the machine together.
Full set of manuals.
Tools to remove the TCM arrays, racks for the manuals.

Unfortunately there were no disks supplied with the machine, although there was some boot software included.

The machine is a model K 3081 processor, containing 64K of fast buffer memory. It has 16 Megabytes of main memory. The 3082 Processor Controller undertakes initialisation of the 3081 processor.

The machine has a memory cycle time of 312 nanoseconds and is 8 bytes wide. It is compatible with other S/370 machines.

A major feature of the machine was the Multi-Chip modules called Thermal Conduction Modules (TCM), shown here. They are helium filled units. 8 can be seen in the top of the main unit, with the pipes for water cooling of the modules. Each module consists of a Multi-Layer Ceramic substrate with up to 118 chips mounted. These are smaller versions of the ones used in the Fujitsu supercomputer in the collection. See the dedicated web page on TCMs. I managed to find a separate one in 2008.
I managed to obtain a TCM in Nov 2008, which I could spit up. It’s the same as the one 2 along and two down in the upper bank in the photo below. Click here for images of it.

Machine condition:
The machine was running before we removed it, but is not running now. The machine was taken out with great care and has all the manuals that also say how to put it together. That is quite unusual for a machine of this size.
Donor: Cambridge University Computing Service

Personal Experiences of the machine:

“The 3084 was a multiprocessor version of the 3081 containing four processors. It was large and filled a big space in a computer room. I suppose I can claim support status for the 3084. My local office thought so anyway. Much of the internal data flow and control of the 308X and the succeeding 3090/9021 can be recognized in today’s microprocessors. There is nothing new under the sun.... just smaller and faster.”

Links:
IBM archives:
http://www-1.ibm.com/ibm/history/exhibits/mainframe/mainframe_PP3084.html
A note from ' http://www.vikingwaters.com/htmlpages/MFHistory.htm ' History of mainframes.
More information from the IBM web site: http://www-03.ibm.com/ibm/history/exhibits/mainframe/mainframe_PP3081.html
The history of the Cambridge Computing Service including details of the machine in the collection:
http://www.cl.cam.ac.uk/UoCCL/misc/EDSAC99/history.html

Terry Judkins description of IBM machines from the time when he worked for IBM:
http://home.comcast.net/~suptjud/IBMMachines.htm

Computerworld 13 Sep 1982 documents the release of the 3084 on the front page (continued on page 6) http://books.google.co.uk/books?id=69kEbmHHmggC&printsec=frontcover&lr=&rview=1#v=onepage&q&f=false 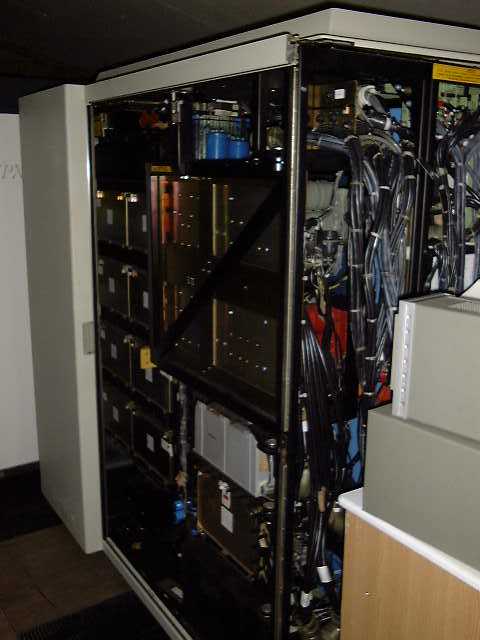 This connects to the System Console, the B indicates that this was the second of the two terminals used to control the two halves of the machine: 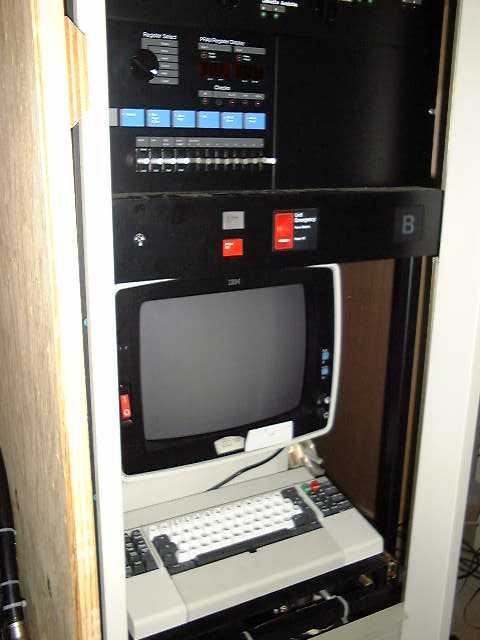 Part of the power unit.

The power unit in the processor.

See http://www.michael-grant.me.uk/phx.html for some reminisces about the machine.